A unique club, a different stadium

The old San Mamés was an icon of world football, it became an internationally renowned ground that earned its nickname: The Cathedral. It opened in 1913 and 100 years later, the current stadium was built in the same place. The new stadium embraced the challenge of conveying the old traditions of San Mamés: its atmosphere, its respect and its passion. Not only that, but at the same time, it had to become an accessible, comfortable and marketable stadium suited to modern times.

With a capacity of 53,331 spectators, it was designed according to the highest standards, those which constitute the Elite Category according to UEFA. It won the best building in the ‘Sports’ category at the 2015 edition of the World Architecture Festival and Venue of the Year 2017 at the World Football Summit. In 2018, The Cathedral hosted the finals of the Challenge Cup and Champions Cup, the most important club rugby tournaments in Europe and it was chosen by UEFA as one of the 12 Euro 2020 host stadiums.

The new San Mamés has already made itself part of the furniture in Bilbao. And it has the same great atmosphere as the old stadium. This is because the stands have been designed to bring fans as close to the pitch as possible. The stadium also contains:

At the dawn of the 20th century, Athletic did not play in actual football grounds but rather fields. The first was in Lamiako (Leioa), and then the club moved to Jolaseta (Getxo). However, as the pitches in Lamiako and Jolaseta were far from Bilbao, Athletic wanted to build a ground of its own, preferably in the city. The dream began to become a reality after the Club rented a plot of land in the borough of San Mamés. 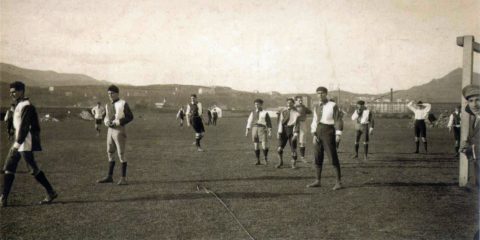 Lamiako could be considered as Athletic Club’s first proper home. The Club competed there often, sharing it with other sides from 1901 to 1911. The pitch in Lamiako was a ground of many firsts: the first game with paying spectators, first Athletic match against a foreign rival and the first visits of future rivals Madrid (1904) and Barcelona (1906).

In 1911, due to the Cup championship organised by our club, Athletic moved to Jolaseta. It was a milestone and a great step forward for football in Biscay. For the first time, a pitch had a covered stand for fans, a seated section (two rows of benches at the front of the stand) and space for standing spectators. 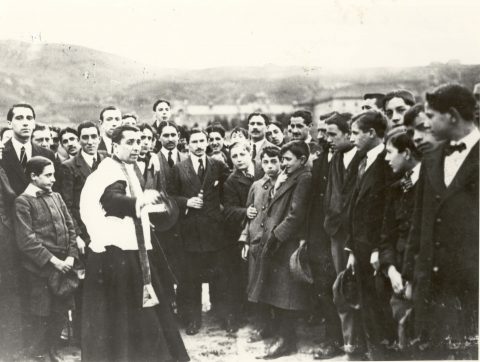 San Mamés is born: general meeting and the first brick

In 1912, and after years of negotiations, the board of directors chaired by Alejandro de la Sota found a plot of land in the neighbourhood of San Mamés. They estimated it would cost some 50,000 pesetas (300.51 euros) to build the new stadium. Athletic did not have the money but managed to raise the necessary funds after showing the project to enthusiastic fans of the club.

On December 10, 1912, in an Extraordinary General Meeting, club members unanimously approved the construction of the new ground, with many of them contributing funds totalling 40,770 pesetas (245.6 euros). This meant that work began very quickly on January 20, 1913. The stadium was designed by architect Manuel María Smith.

The ground had a seven-thousand-spectator capacity. Three thousand on a wooden stand, which had facilities for the public and players. On each side of that main stand there were terraces, one of them with a food stall and a bar. The pitch, surrounded by a thin fence, resembled an immense green carpet and the Athletic Club flag flew above the stadium on a large mast.

On Thursday, August 21,1913, at 15.30, the gates of San Mamés opened to the public for the first time. Five minutes before the start of the match, the stadium registered its first full house. At 17:20, Seve Zuazo got the ball rolling. Just five minutes after kick-off, Pichichi scored the first goal in The Cathedral.

The stadium, which for the first ten years was rented to the heirs of Pedro Novia Salcedo, was used for a century. Initially, the ground housed 7,000 spectators, but it was constantly undergoing extensions and reforms. In 1952, the arch was fitted, and the last major reform took place in the run up to World Cup 82, with the ground reaching its maximum capacity of 45,000 spectators. In 2013, after 100 years and 3,695 matches, San Mamés, The Cathedral, moved aside for the new San Mamés. 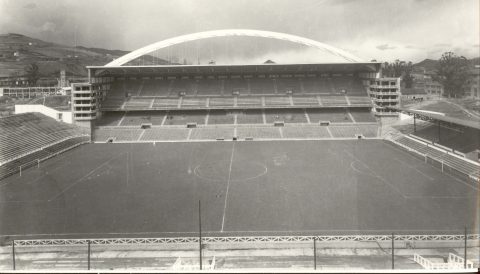 Purchase of San Mamés and the Arch

On December 31, 1946, President José María Larrea signed the purchase deed for the piece of land the San Mamés stadium sits on. In 1951, the club organised a competition for the stadium’s reformation. It was won by architects Domínguez Salazar, Magdalena Gayán and De Miguel González. The architectural team was rounded off by engineer Fernández Casado, creator of the club’s iconic arch, a symbol of industrial Bilbao.

In 1953, the arch became a fundamental part of the new Main Stand and its visual impact was enormous. It rose 40 metres above the pitch, 56 metres when counting the arch itself, much higher than the surrounding buildings. It currently sits on top of one of the stands in the main stadium at Athletic’s Lezama Training Complex.

The last great reform of the old San Mamés occurred when the stadium was selected to host matches at World Cup 82. It was the first overhaul to affect the entire stadium giving the impression that an entirely new stadium was being built. The architects behind the project were Luis Pueyo, Javier Salazar and Imanol Abando. The work consisted of knocking down the stands behind the goals and the towers which housed the boxes and held up the Arch, and then reconstructing them into one continuous curve to create an uninterrupted space. With the exception of the main stand, the exterior was covered in white sheet metal giving the stadium a consistent look for the first time. 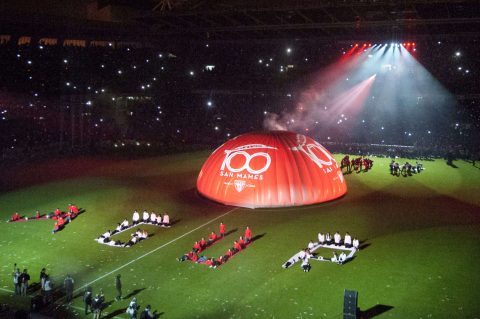 The 2012-13 season was the last one for the old San Mamés. Even though there were no outstanding sporting feats, the stadium change created an unforgettable atmosphere on an emotional level. During the campaign, visiting sides were given a souvenir from the old stadium, whilst our fans counted down the time they had left with the ground.

On May 26, 2013, Athletic played their last official match in the stadium, a 0-1 defeat in La Liga to Levante UD. On June 5, 2013, the Cathedral saw its final game. It was a tribute to local football, a farewell party among family which saw Athletic Club take on a Biscay Select XI, the final score 0-1.

History of the Stadium
The new San Mamés
2013 - Today

The new stadium was built on virtually the same site as the old one and continues its legacy in being one of football’s most revered grounds, living up to the nickname it inherited: The Cathedral. Its modern and innovative architecture as well as its classic location means its 53,000 spectators live the most authentic of football experiences. The essence of our history combines in a harmonious way with modern times. 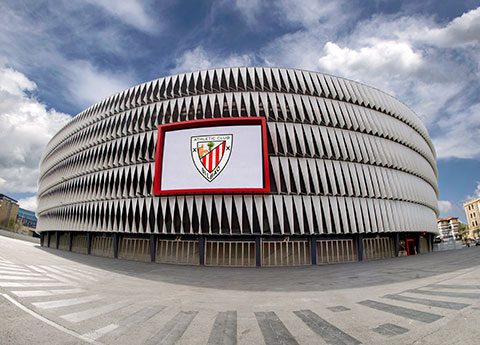 Winner of the ‘Sports’ category at the 2015 World Architecture Festival and Venue of the Year at the 2017 World Football Summit, the new San Mamés has become an icon in the city of Bilbao. It’s created a new atmosphere whilst keeping fans close to the pitch like the old stadium.

In terms of commercialisation, the search for income is always carried out whilst respecting ‘The Athletic Club rulebook’. That’s to say, by respecting tradition, the wishes of fan members and the region’s ingrained values. 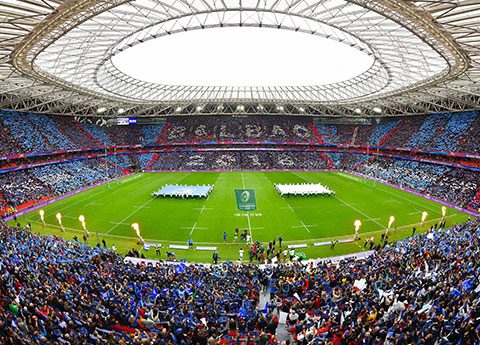 The high standard of design, comfort, security, accessibility and services have seen UEFA certify San Mamés as an Elite stadium, a maximum rating which enables the stadium to host the biggest events.

Thanks to that, UEFA has chosen San Mamés to be one of Euro 2020’s host stadiums. What’s more, in May 2018, the Rugby Challenge Cup and Champions Cup finals -the most prestigious club tournaments in European rugby- were held in the Cathedral. 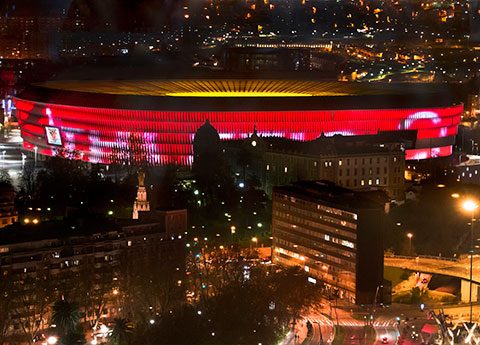 The San Mamés’ light displays have become one the stadium’s signature features. The stadium is equipped with a dynamic LED lighting system that allows the Club to change the white ETFE panels on the stadium’s facade to any other colour or light combination.

San Mamés was the first European football stadium to achieve the LEED (Leadership in Energy and Environmental Design) sustainable building certificate, the most important international certification in this field.

Tickets and how to arrive
For information about tickets, getting to the stadium and parking, click here.